HTC returned to their designer phone roots with the introduction of a trio of devices – the Desire 530, 630 and 825 running on Android 6.0 Marshmallow OS.

The relatively top-end model of the trio, the 825 comes in Graphite Grey Remix and Stratus White colours which can be further customized with snap on cases. The phone features a 5.5″ LCD with 720x1280p resolution powered by a Snapdragon 400 quad-core chipset clocked at 1.4GHZ paired with 2GB RAM. It has 16GB internal storage expandable via microSD slot. The stereo speakers are Hi-Res audio certified including Boomsound with Dolby Audio. Rounding up the list is the 13MP rear camera and 5MP front camera.

The Desire 530 includes a Snapdragon 210 and 1.5GB RAM making it the lowest end model of the lot. The remaining specs are the same as the 630 although it loses the High-Res certification.

The devices will be available for sale from March 2016 directly from HTC and other online retailers.

Lenovo and Google are collaborating to create the world’s first smartphone powered by Project Tango technology. The device was originally announced at the CES 2016 electronics show in January.

The upcoming smartphone supports augmented reality features developed under the project. Made up of 3D motion tracking with depth sensors, it gives a mobile device the ability to know its location and how it will navigate through the area. Then the AR software overlays graphics or text on the displayed real image providing further information about it in real time.

The device is expected sometime in July 2016 at a competitive price.

The highly anticipated flagship smartphone was finally revealed today ending months of rumours and speculation. But the biggest surprise is Xiaomi offering the phone in 3 different versions confirming various leaks prior to the MWC 16. Along with weekly updates from the company, Xiaomi’s cross platform Mi Video Calling app makes its debut in the Mi5. 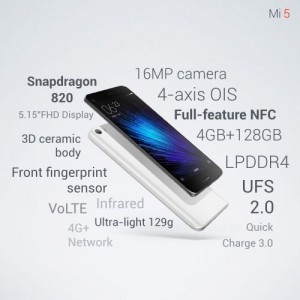 The rest of the specifications are the same as listed above.

Following the launch in China on 1 March, 2016 is India which is next in line for the smartphone.

Samsung revealed the existence of the Gear 360, a 30MP twin lens camera at the MWC 16 joining the likes of LG with their own 360 camera.

Featuring a water and dust resistant body, the camera includes a standard tripod mount on the bottom with a handgrip plus a removable and chargeable battery making it highly portable. The bundled PC software helps with advanced and in-depth video editing.

No word on pricing yet but the camera is expected in Q2 2016.

Gionee showcased their latest flagship phone, the S8 and new logo having the tagline ‘Make Smiles’ with the aim of reidentifying themselves. The S8 makes major changes and improvements over it’s predecessor the S7 in terms of specs and features. The full metal design of the sleek body hides the world’s first invisible loop antenna reportedly having excellent signal strength. The highlight of the S8 is the 3D touch capable of detecting upto 5 simultaneous finger presses.