Samsung launched the Galaxy Tab A (2017) today aiming at casual content consumers. The device has received a few minor improvements over the older model.

The Tab A features an 8″ TFT screen running at 1280x800p resolution. The display increased brightness of 480nits in comparison to 400nits of the 2015 Tab A. It is powered by a Qualcomm Snapdragon 425 processor clocked at 1.4GHz. The quad-core chipset should suffice for casual usage like basic gaming and movie viewing. It has 2GB RAM and 16GB inbuilt storage space that can further be expanded upto 256GB via microSD.

The Galaxy Tab A is priced at Rs.17,990 and will be sold across all major offline and online retailers across the country.

Front of the Tab A 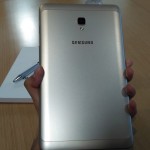 Rear of the Tab A