Chinese smartphone maker Xiaomi launched their largest smartphone in India today, the Mi Max. The massive 6.44″ device has a curved metal body with chamfered edges to reduce fatigue which sets in quite easily when holding such devices. The front of the Mi Max is covered by a 2.5D Corning Gorilla Glass 3. It is aimed to bridge the gap between smartphones and tablets marrying the best of both in a device that is neither too big nor too small.

Interestingly, the Mi Max is able to pack a 4,850mAh battery – the biggest from the company till date in just 7.5mm thickness. Coincidentally, the device weighs the same as the first Redmi Note.

The dual-SIM, 4G enabled phablet comes in 2 variants although only the base model will be available for a while. The higher end model is powered by a Qualcomm Snapdragon 652 processor paired with 4GB RAM and 128GB storage. The rest of the specs remain the same.

The base model is priced at Rs. 14,999 and will go on a limited flash sale for 1 week from July 6 exclusively on the Mi India site for which registrations have already started. Later, it will go on open sale from July 13 across major ecommerce portals. No word on when the 4GB+128GB variant will be sold although it is expected one month later in August 2016. 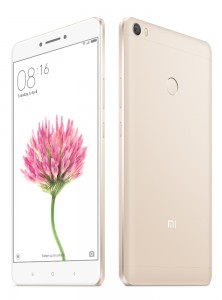