Realme has expanded their lineup by launching Realme 3 at an event in the capital today. This is the 5th device from the company to hit the Indian market in a span of just 10 months.

To give a premium feel, 3D Gradient Unibody design has been adopted. The gradient effects of the Dynamic Black variant  include the overlap of two layers of black and blue ink for which eight high precision spray guns are used. These do three rounds of spraying after which the unibody is baked thrice after each process while pearl-like particles are added. For the Radiant Blue variant, a silver reflective coating is done beneath the blue and green gradient layers.

Realme 3 sports a 6.2″ HD+ (720x1520p) Dewdrop display with Gorilla Glass 3 protection having 450nits peak brightness and 19:9 aspect ratio. Underneath, a MediaTek Helio P70 SoC is present keeping all things running smooth. The 12nm fabricated processor was previously seen on Realme U1 that was released last year in November. ColorOS 6 based on Android Pie will come preloaded out of the box boasting of many improvements. Additionally, access to Camera2 API and an unlocked bootloader are also included. 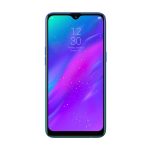 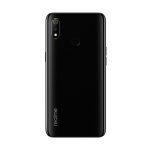 Rear of the Black variant 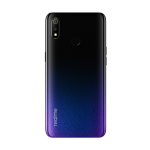 Rear of the Dynamic Black variant 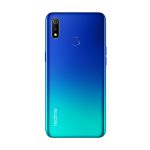 Rear of the Radiant Blue variant

Coming to optics, the Dewdrop notch houses a 13MP selfie camera with f/2.0 aperture and 1.12micron pixels capable of beautification and quick face unlock. On the rear is a dual camera setup consisting of a 13MP primary sensor with f/1.8 aperture and a 2MP depth sensor. They are enhanced with Chromaboost which improves the dynamic range when shooting a backlit subject while Nightscape takes a long exposure shot to improve details on low light photographs. AI has been used for Smart App management, Scene recognition, AI Beauty 2.0 and Night Shot Optimisation. A 4230mAh battery should deliver good battery backup with CABC (Content Adaptive Brightness Control) further promising extra 5% in Balance Mode and 10% in High Energy Efficiency Mode.

Mr. Madhav Sheth, CEO, Realme India had the following to say: “We wanted to get power from Realme 1 and style from Realme 2 so we came out with Realme 3 which signifies ‘Power meets Style’ at this affordable price range for our customers. In last 10 months, we have managed to sell 5 million units and to celebrate this milestone we will offer the 3GB and 4GB variants at IN R 8999 and INR 10,999 respectively for the next 1 million users.”