After getting revealed at MWC 2018 last week, Samsung has launched their flagship S9 series for the Indian market today. This time, the country is getting a global launch date unlike last year where it came two weeks later.

Both the devices have gotten various upgrades like HDR10 video support and Dolby Atmos sound output through the new front firing speakers. The bezels have also been marginally reduced giving the impression of a larger screen. The fingerprint sensor has been re-positioned to below the camera sensor instead of resting alongside it which was criticised in the S8. Even durability has been improved with 20% greater drop protection and Gorilla Glass 5 coating. Based on Android Oreo, the customised UI dubbed “Samsung Experience” includes pre-loaded apps that only serve to increase bloatware on the devices. AR Emojis have been introduced to counter Apple’s Animoji but unlike the latter, Samsung’s solution will work with third party apps.

The key differences between S9 and S9+ are the larger size, bigger battery, increased RAM and the dual camera setup on the rear. While the feature set is identical for the most part, the secondary rear camera in the S9+ offers 2x optical zoom and Portrait Mode. Both devices house a main 12MP sensor with a mechanical aperture that can move between f/2.4 and f/1.5 depending on the lighting conditions. They are also capable of capturing super slow motion video at 960FPS at HD (720p) resolution. 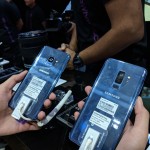 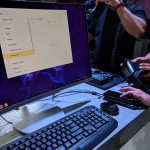 The S9 connected to the Dex 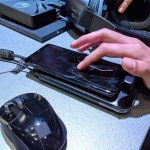 Working as a trackpad 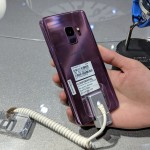 The rear of the Lilac Purple 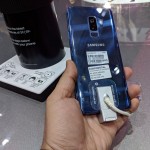 The rear of the Coral Blue 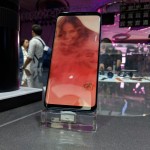 The front of the Midnight Black